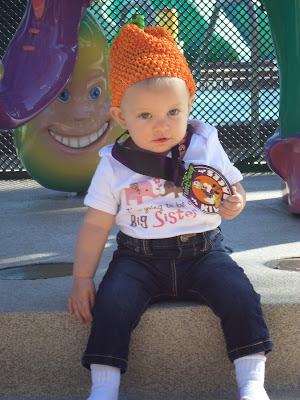 It is with great joy and excitement that I announce little lady’s promotion to BIG SISTER!  We will welcome our new little love bug home in April of 2015!!
Now, the details!
How / When did you find out?
During the Month of August I’d been feeling quite nauseated, tired, and just over all blah. I decided that I “couldn’t be pregnant!”  and figured I was over training. I had just started doing PIYO six days a week, and was running 3 days a week. Additionally, i’d just gone back to work full time So, I thought I was just plain tired.
Well… There was about 3 days in Early September that I was physically unable to move. Every time I moved, I would be instantly dizzy and nauseated – thankfully it was a weekend so I was hoping I’d feel better enough for work on Monday, but when Monday rolled around and I was still vomiting and  I called in sick. By 11 a.m. I was so weak I called my husband and asked him to come take me to urgent care.
The nurse asked for my permission to give me a pregnancy test and I agreed.
The doctor told me I was “dehydrated” and there is a bug going around. He said he could give me some fluids and anti-nausea medication and send me home, so we agreed that i’d go get some rest.
Since he didn’t say anything about the test, I figured It was just dehydration and was happy to get some medication and be on my way.
A few minutes later the doctor runs back in and says
“THE MYSTERY IS SOLVED!
YOU ARE PREGNANT”
Now, at this moment in time I had a baby who wasn’t even 7 months old. …
WHAT?
I looked at him with a blank stare and then burst into tears.
How close in age will they be?
15 months.
How are you feeling?
This pregnancy is far different than my first. I have been so sick. Zero appetite, Zero desire to even hydrate, I just feel blah.
I’ve lost about 5 pounds, and am hoping the nausea will stop soon so that eating will stop feeling like a chore.
Goofy Challenge?
After many conversations with my doctor, I have been cleared (for now) to keep running and training.
It’s been a struggle to run because I’ve been so sick, but when I’m running, the nausea goes away…
So, maybe I can just run all the time?
As my pregnancy progresses we will see how I feel, but I am not too proud to walk if I have to or even wait for the bus if I feel its better for our baby.
My doctor keeps telling me “don’t be a hero, just know your body”  So, that’s my new mantra… “don’t be a hero, don’t be a hero”…
Cravings??
No.
I don’t want anything.
Except, the other day I wanted spaghetti o’s. … That was odd.
Question of the day: Do you have a sibling or children less than two years apart?