Grab a cup of coffee, and read all about my very first half marathon! 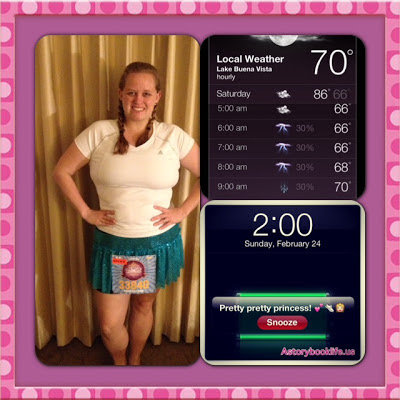 Since we stayed off of property, we had to get up EXTRA early. My Ursula costume wasn’t working so I changed to a “Cinderella inspired” option. Upon checking the weather I realized it was probably going to rain and I didn’t really want to be wearing white if it did.

So, … I snapped a picture  and changed into a pink shirt and went with a Princess Aurora inspired look!

We left the hotel and headed to Epcot!  We may have left a little early because the roads were not blocked off all the way yet, and our gps (and the traffic directors) directed us right to the STAGE! Yep. … the stage. The bad thing is, we were IN OUR CAR!!! haha So, we got turned around (yelled at by some other traffic people) and headed to find the runner parking!

Finally at the race (about 3:30ish a.m. a.k.a. 1 hour after we left our hotel room that was literally 5 minutes away) we made our way to the stage. I really wanted to meet up with some princesses and be calm before the race but that lines were REALLY long and so I opted to stand in the potty line instead.  After a little bit of dancing, and sneaking in shots of the Princesses between pictures with the runners it was time for us to start walking to the Corrals.

On the way to the race I had eaten my traditional handful of nuts and right when we got there I ate my apple. So, at 4 a.m. I felt great! My tummy was full, I was excited, I was in the zone.

We finally made it to the Corral (after what felt like an eternity) and I began to realize that I was about to run a half marathon. After months of training, a wisdom teeth extraction nightmare and starting my whole training plan OVER after 2 months of not running, the day was here and I was ready!

FYI – we were originally scheduled for the very last Corral (H) but with our 10K time were were able to get moved up to E!!!

Anyway – we sang along to the music, took some more pictures and before we knew it, it was our turn! 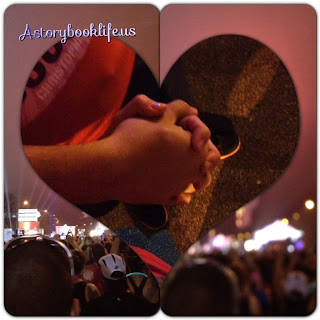 I was so thankful to have my husband there with me, he has been my coach, my cheerleader and my bestie and I couldn’t be more thankful to have him in my life (His blog. )
With the sights and sounds of fireworks, we were off.
Miles 1-5 weren’t exactly anything to blog about, a lot of smiling, a lot of happiness and a lot of running! In FACT we were running at about a 10 minute pace. For a girl who averages 13 – 14 minutes, i’d say

that is PRETTY GOOD! 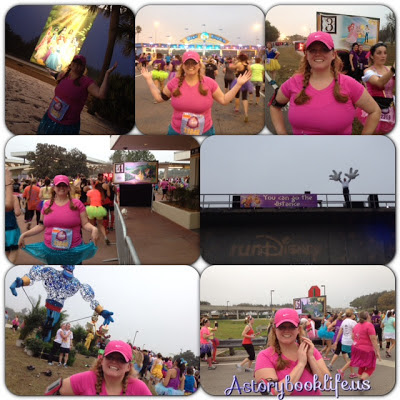 We entered the Magic Kingdom, and just about the time you’d THINK I would start to pick up the pace, my body began to crash.

Remember when I told you I ate right when we arrived (at like 4?) Well, we didn’t start running until 6. Therefore, my food was practically gone so I was relying heavily on my cliff shots, water breaks and power aide.

I held it together through the Magic Kingdom, and had fun stopping for some pictures along the way. As you can see, I was super happy and excited to be inside the Magic Kingdom. I got a little wave from Minnie, and continued on my way. 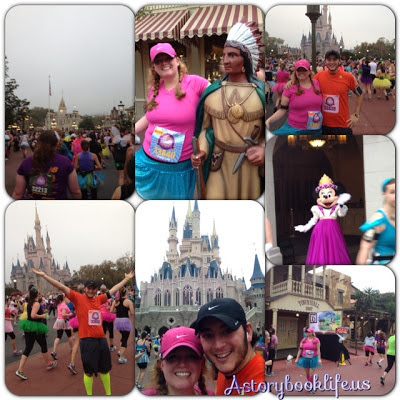 As I continued, my pace began to slow down and my body began to shut down… I needed food. That apple and those nuts were GONE.I  was dizzy, my head was pounding, my cheeks were as bright as a red rose. With rosy cheeks, and chills I refused to let it beat me! I grabbed my husbands hand and asked him to please let me walk.

As we walked and I refused to tell him what I was experiencing (because I didn’t want him to take me to the medical tent) I felt the tears begin to come. We had sacrificed so much to be at the race. Hours upon hours of training, hours upon hours of reading and researching how to be a runner. Hours of planning and budgeting. How could mile 9-12 be this hard? How could I have been so stupid not to eat enough?  Why was this happening?  All those thoughts filled my head and a few tears began to fall. Just as I was getting ready to act like a big girl, I felt someone rub my back, look me in the eye and tell me “good job!” She made sure I saw her, because she then grabbed my elbow and repeated herself. With tears in my eyes I thanked her and hoped she would move on so not to see me cry. 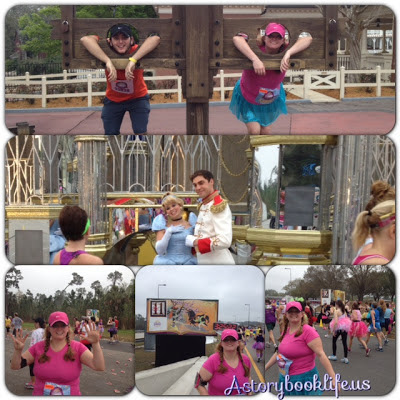 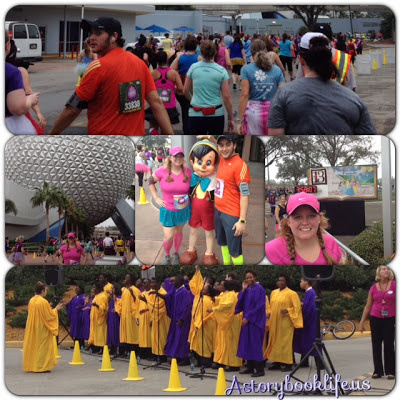 We finally made it to Epcot, and my darling waited in line to meet Pinocchio. After a few pictures in Epcot it was time to finish what we started. So, we took a picture at mile 13 grabbed hands and ran it in!

As we ran it in, my husband got a big high five from goofy, and I was dusted with some pixie dust! A beautiful pink, gold, glittered, Princess Half  Marathon medal was placed around my neck and the realization hit me. 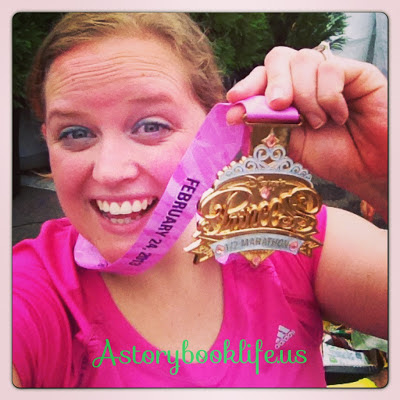 As you know, I am a Jeff Galloway blogger and as such I receive tips from Jeff to share with all of […]

As you probably know, my husband is in Graduate School (Gradschool Blog). The program is online, but not fully. Therefore, he has to […]

Today is the 1 year anniversary of my career as a runner and I’m feeling a little emotional about it. On February […]