Happy Wednesday Friends!
I have a little secret… I never actually went to the expo for Princess half. Yep… I skipped it.  My race packet and shirts were all in the same room as the Kids Races packets and since there had been tales of chaos over in the actual expo, I opted to keep my girls out of that mess. Honestly, there wasn’t anything I absolutely needed to purchase so it was the best decision. I am sad I missed it, but my sisters and niece went on Thursday evening. They seemed to have a great time, so I asked my little sister to share about her first ever RunDisney Expo and Packet pick up experience!
Hello! My name is Dana and I am Erin’s younger sister.The Enchanted 10k was my first Disney race and my sister asked me to talk a little about my experience with the exposition and packet pick up!
I arrived in Orlando early Thursday afternoon with our other sister Ruth, so we could settle into our hotel rooms, pick up our packets and visit the exposition. The plan worked out for us because we didn’t have to rush to the Kids Races on Friday. Ruth kept Junebug (1.5 years)  in the carrier for most of our trip to the expo, so we wouldn’t have to worry about her running around.
Packet Pick-up: Quick and easy! In the downstairs hallway, there were computers and printers for people to print their own waiver. We printed our waivers ahead of time, so we skipped past that crowd. The main room was full of booths and each was clearly marked with the bib numbers that could be picked up there. Bib numbers are printed on the waivers and we were able to go straight to our assigned booths.
After I picked up my packet, I found Ruth at the front of her line and she had already picked up Junebug’s packet. Since she was running the Glass Slipper challenge, she had to take a quick picture with her bib.
There were 2 spots for character pictures, but no characters were out at this time.  We did get to do a Snow White themed photo opportunity! In honor of Snow White being released there was a green screen and 4 or 5 Snow White backgrounds to choose from. They printed out the photos for you AND they emailed you a digital copy! There were also free buttons on the table!
Exposition: We had to go to another building for the Expo and this one was much more crowded! As soon as I looked down on the crowd I was ready to leave.
I had to get over it for 3 reasons:
By the time 1 and 2 were done I had made my peace with the crowd and started to enjoy the event. I was surprised by the amount of free stuff given away. We picked up a lot of samples throughout the expo and we took pictures at the GoodSense booth. GoodSense had a green screen and we could choose our 1 of 3 backgrounds and they emailed us a digital copy of our photo. They also had a prize wheel to spin and I won a sample pack. Junebug won a high five and looked so cute holding up her hand for her high five, she was also given a cowbell. Although it didn’t look too busy when I peeked in,  I never made it into the area where the “I did it” shirts were sold; but that’s okay because I really liked the 10k shirt that RunDisney provided with my registration. 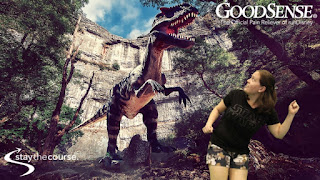 _ _ _
Dana rocked her first RunDisney race and is *thinking* about doing another one next year after she accomplishes some swimming goals!
Anyway, if you enjoyed hearing from Dana you can check out her FB page. She shares a lot of motivational posts and healthy recipes.
For more about the Princess weekend, check back on the next couple of Wednesdays or here (10K costume) and here (half marathon costume).

Did you know that according to the Centers for Disease Control and Prevention, the childhood obesity rate as more than doubled since […]

It’s been a while since I tried a new recipe. I’d gotten into a groove of buying the same groceries over and […]

The calendar has flipped from December to January.Our Holiday decorations have begun to be packed away, and we are all trying to […]

Good morning friends, I’ve received another set of tips from Jeff Galloway to share with all of you!  This time it’s all about speed! […]