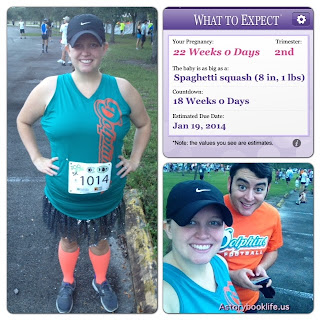 Last Sunday I had the opportunity to participate in an inagural run at the Miami Zoo. One of my fitness dreams for this year was to run in an inagural race, and I got to run in TWO (so far).  The first one was the Tutu 10K relay and the second, of course this one!

Packet Pick Up
They had packet pick up at a local running store, and everything was super organized. I was in an out super quick, and even had a chance to check out a new running belt.

The Event
We arrived at the event nice and early, found parking and headed to the start line. Note to self, porta-potties are gross. Porta-potties when you’re pregnant are unbearable! (Runner Problems) Anyways!! The event started on time after a moment of silence in memory of September 11th, as well as The 2013 Boston Marathon. I had tears in my eyes as a crowd of 2200 runners + spectators stood silently reflecting on freedom.

The Post Event
After the run there were several vendors, bounce houses and activities. I certainly enjoyed walking around eating all the samples. 🙂

In addition to all of the samples, bounce houses and other fun activities the zoo was open for everyone to enjoy!

Pregnant Running
Wow! Running while pregnant is not easy. I ended up walking most of the 5K – but I did manage to complete my goal.

My goal was to complete the 5k in under an hour and my time was 52 minutes and 4 seconds.

Question: What has been your most recent fitness goal that you accomplished? 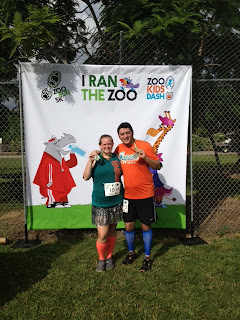 “RUNNING IS THE WORST”  You’ve said it, you’ve heard it, but do you really believe that running is the worst? I used to […]

Sponsored Post – All opinions are my very own.  Are you a runner, a walker, a non-athletic person who loves to have […]

Since I’m expecting, I no longer get the pleasure of standing on a scale and celebrating when I lose weight. In fact, […]

We are approaching the end of my hip hop abs program, and although my six pack abs never showed up, I thought […]