Thank you SO much for all the love on the other days post. I didn’t set out to be an inspiration, I set out to be a healthier version of me. It’s a journey I’m still on.

Last weekend my husband attended a Bible Conference with Missionary to Niger Nate Bramsen. I had the opportunity to hear some of the messages, but mostly I was watching the girls.  I mentioned to my sister that I needed a to run a 10K for a submission time for the Princess Half Marathon and she recommended that I run a 10K at my former school (Lake Sumter Community College). 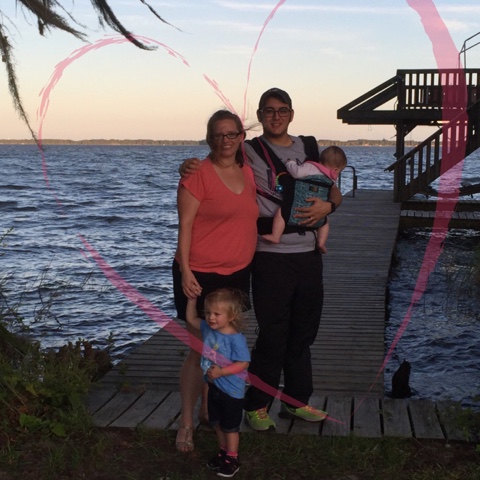 Since she agreed to watch my oldest, I registered! $30 for a 10K isn’t a bad deal when you just paid 200+ over to Mickey Mouse.

The two nights before the race I couldn’t sleep, at all. The first night (Thursday) I was at my inlaws house in South Florida because the girls had pediatrician appointments on Friday (yes, we kept our pediatrician in Miami…even after the move). Friday we made it to camp for the conference and both girls were WIDE awake from the excitement of being with family and in a new place – basically I didn’t fall asleep until about 2 a.m. and then the baby woke up at 5 a.m. when Daddy went to go for his long run.

6:45 a.m. (ish) I headed out with our oldest daughter and my sister to the race. 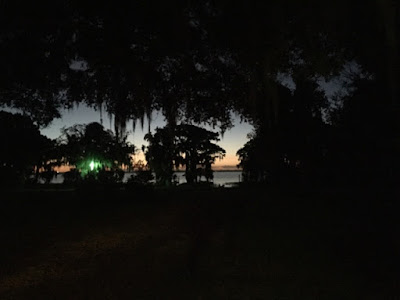 They had some stretching before the race, but I am more of a dynamic stretching type of girl so I warmed up on my own. I noticed my FAVORITE professor (who is now retired) has a bench in her honor near the track. It made me smile, and reminded me of the time I clocked a 22 minute mile in Fitness class and she told me I needed to work on that. 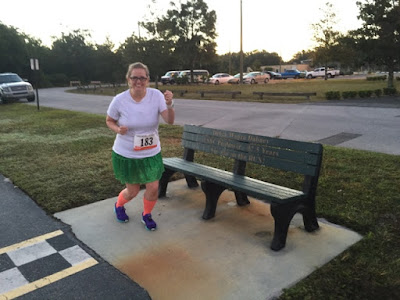 The race started around 8:00 a.m., and I along with about 30 other people headed out around Silver Lake. The 10K course was two laps around the lake and the 5K was one time around the lake. 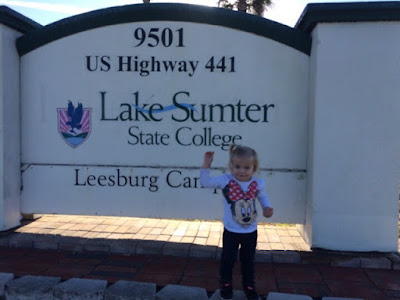 I’d forgotten my visor  but I didn’t think I’d miss it. Well, I did. If you don’t have a Sparkle Athletic visor, GO GET ONE. It was no fun having sweat dripping into my eyes for the 10K. 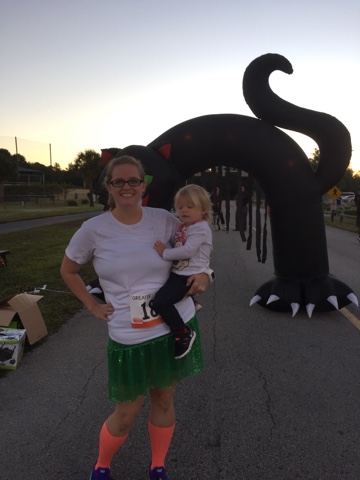 Since it was a small race, I ran by myself for most of the time. I could see some people a little in front of me, and some people behind me but for the most part I was alone. There were two water stops around the lake staffed by the college’s baseball players

The race ended through a giant blow up cat with plenty of water and snacks for the finishers! 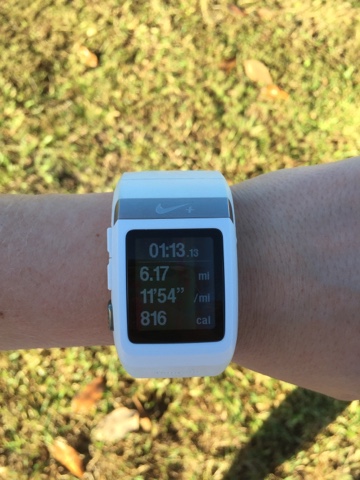 I was excited to PR on this race, especially since I’m using it as a submission time for corral placement in the Princess Half!

Would I participate in this event again?
Probably not. It was fun to do once but I’m not sure I’d do it again unless someone did it with me. I was a little bored and lonely on the course. 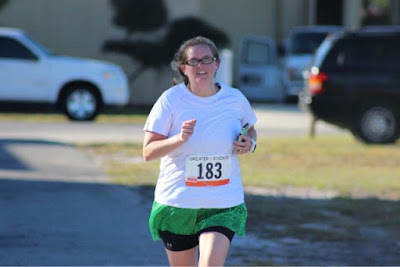 Question of the day: Do you like to run in costume?

It’s official, I’m going Goofy. On February 27th, 2012 there was NO way I was expecting to be thinking about running a […]

So, I quit PIYO.  Even though my overall fitness goal for 2017 is to build my core, and my February goal was to […]

Friends, I’m in! I’m officially registered for the 2016 Princess Glass Slipper Challenge! Any other princesses out there? I’m looking forward to […]

Summer heat is upon us down here in South Florida, so I decided to make some “Elsa Spray” for my husband to […]